First posts are always overwhelming to write. I want to write everything down all at once so that you can know all the entire backstory of my pack and how we came to be. Even though I’d like to write a novel about each of us, I’ll skip the writer’s diarrhea as I like to call it  and give you a quick overview.

Hi my name is Becky and I like dogs. I have spent my entire life as an avid equestrian (showjumping, hunters, equitation) and with horses come dogs. I have owned large dogs (hounds, standard poodle), medium dogs (Brittany spaniel), and small dogs (dachshunds, pugs, Jack Russell terriers). I grew up and still live in Massachusetts. I work full time (and then some), but enjoy working as much dog time into my schedule as possible.

I have been debating on whether it would be best to introduce them in chronological order by arrival date, birthday, or in size order. I suppose birth order is good enough.

Clementine is a supposedly 15 year old Jack Russell terrier mix. Both myself, Nick, and our vet think that she’s probably younger than that and possibly a chihuahua mix, but for all intents and purposes we will call her the oldest. She became part of our family on July 3, 2017 after being surrendered to the NYACC and subsequently being spring by Beastly Rescue. Clementine’s most defining feature is her tongue – she has very few teeth left so her tongue is always sticking out. She’s short, soft, sassy, and always ready to eat. Her best playmate is Roo Frank – they wrestle and, despite having no teeth and being a senior, she still kicks his butt. 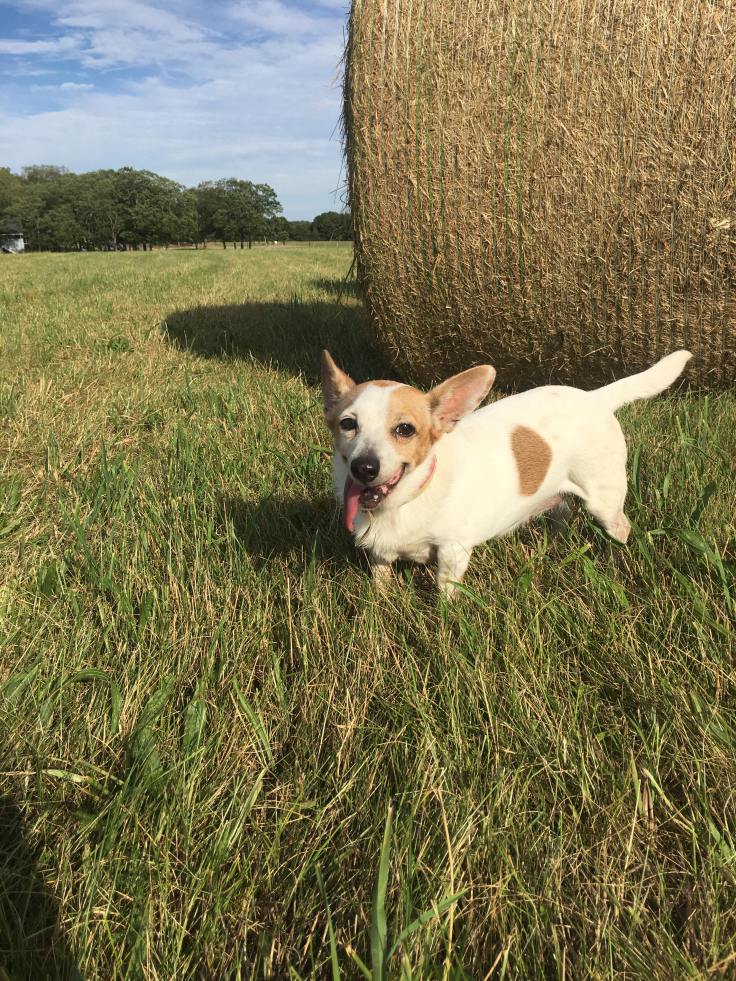 I’ve had Bella the longest (9 years) and she is by far the sweetest of the group. She was given to my by an acquaintance who had bought her for his girlfriend. They broke up and the new girlfriend was allergic, so poor Bella was relegated to the basement. Bella is so sweet, outgoing, and affectionate that having to be separate from her family was torturous! I originally took her to keep my other dog who has since passed (Blueberry RIP) company, and she has turned out to be a valuable piece of the pack. Her easy going temperament make her the perfect “first dog” for the new dogs to meet. She loves people of all sizes and shapes, so bringing her along to help other shy dogs break the ice with new people has been a treat. Bella is turning 11 this year so she is slowing down physically, but she’ll always be the sweetest dog in the pack.

When Joe arrived almost 4 years ago, he was the first big do I had owned in awhile. He has limitless energy and was like a bull in a china shop. Even though he was a bit of a menace at first, Joe has proven to me over and over again how smart and good natured he really is. Like most pits, he looks intimidating… however he’s 100 lbs of pure happiness. Often referred to as the happiest dog on earth, Joe has taught me so much about handling large, strong, intelligent dogs. Together Joe an I have completed several obedience classes, passed the AKC CGC (canine good citizens) test, and he holds a Novice Trick Title. He has inspired me to continue learning more about dog sports and we will be starting a novice competition obedience class soon with the intent to compete! Joe has had TPLO surgery on both knees, so although he has a few physical limitations, he’s game for just about any adventure. 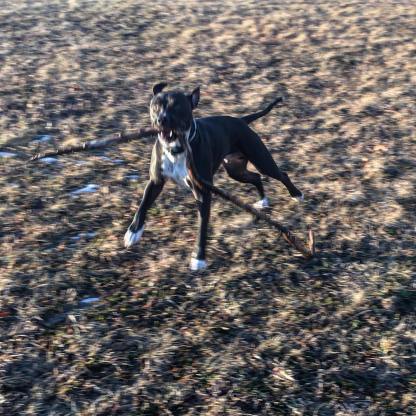 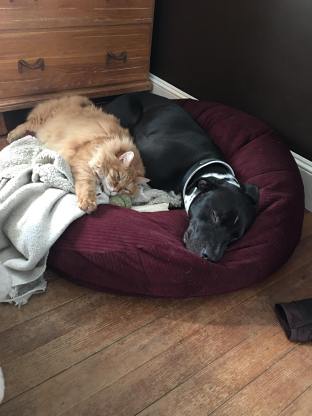 When my beloved dachshund Blueberry passed last year, she left en enormous void. She had been the leader of the trio and without her, Joe and Bella were depressed and lost. We all were really. After giving myself time to grieve, I knew that we needed a other sausage in our house. I contacted Dachshund Rescue of South Florida, and they matched me up with a little 14 week old puppy we decided to call Roo. Roo was one of 7 brothers than were flown over from Puerto Rico after being found as strays. He was a tiny, wirey ball of adorable and as he grew it became apparent he wasn’t a true dachshund. A DNA test revealed that he is 50% miniature poodle, 25% pitbull, and 25% sight hound. Regardless, he is exactly what we needed – smart, sweet, and a whole lot of naughty, mischievous Roo Frank has never met a stranger (human, canine, or otherwise). 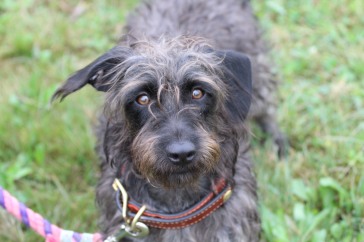 Sioux is the youngest and most recent addition to our family. She is a 5 month old Belgian Malinios whom I am hoping will be my true sport dog. Sioux is shy but ridiculously smart and freakishly athletic. So far she has settled into the pack nicely and running her with Joe and Roo has brought her out of her shell.