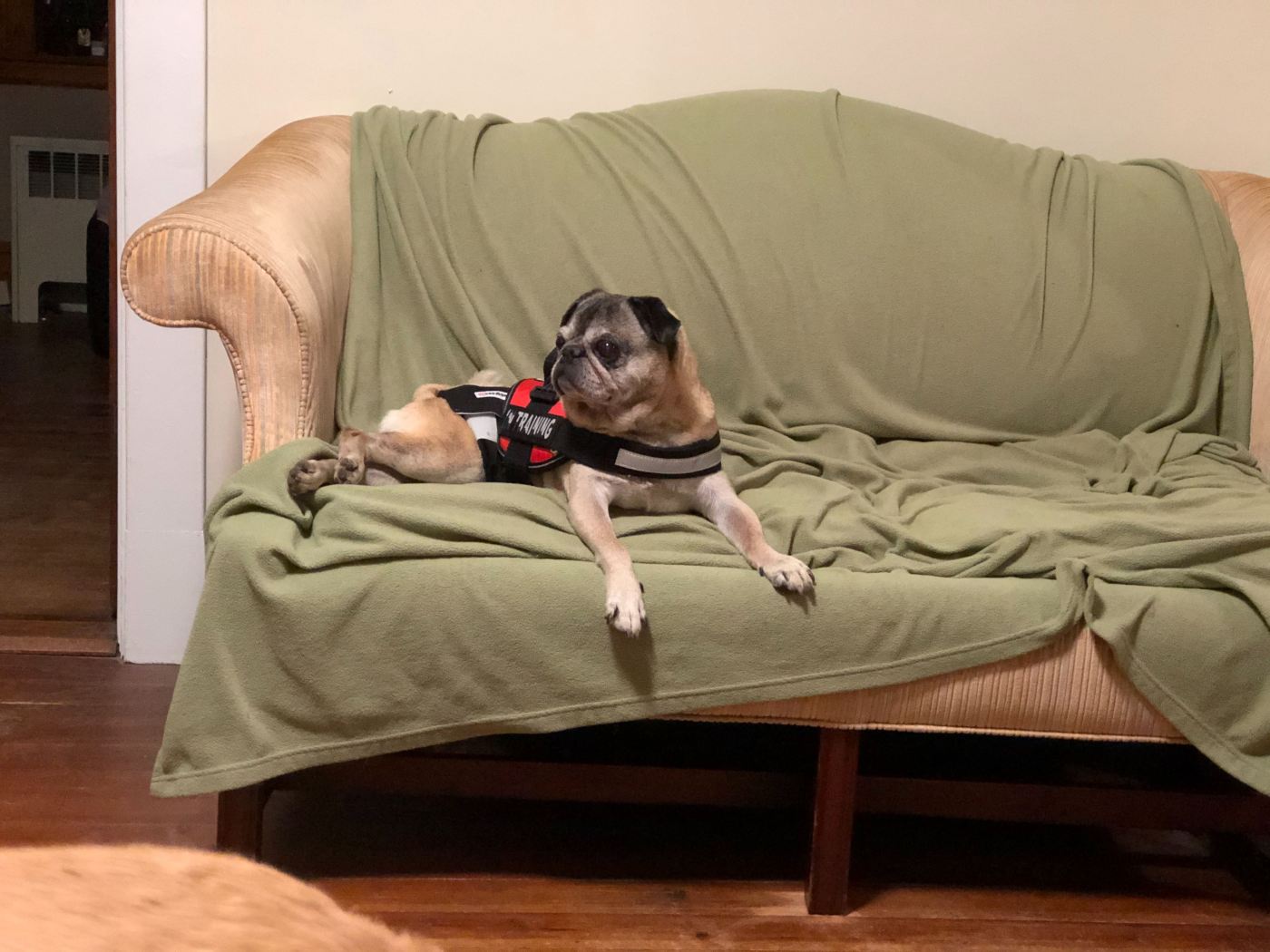 After Bella’s passing I didn’t want another pug. I didn’t want to look at pugs, hear pugs, none of it. But if you know me at all, you know that grunting noises and a set of googley eyes draw me like in a seagulls to a dumpster. So let me tell you the story of Eddie.

The first week of October, I was perusing the city shelter website as I sometimes do (I always know somebody looking for someone, and often that’s a good place to start a best friend search). I saw a black pug and thought “how strange, those are rare and it’s really rare to see one in that place.” Knowing that pugs are a hot commodity and that they usually don’t last more than a day or two before they’re whisked away to a breed specific rescue, I didn’t linger long. But the next day, and the day after that he was still there. Finally, on day 5, I made the call to a rescue partner in Brooklyn. IF he was still there and IF they wanted to pull him, I would foster him. What harm could fostering do right? I’d get my pug fix, he’d get out of jail, it’s a win-win.

When the rescue inquired about the black pug, he had indeed been scooped up by another rescue. I wasn’t overly disappointed – ANY day a dog walks out of the NYACC alive and into loving arms is a great day. But my rescue partner now knew something that maybe I hadn’t fully realized yet – I was looking. She asked me if I’d like her to call me when the next available pug turned up and I said sure. Eddie was that pug.

There’s no skirting around the fact that Eddie, formerly Cobblepot #78433 of the NYACC, was a bit of a train wreck. Neurological issues rendered him unable to use his back legs to walk, so his hind legs had extreme muscle wasting and were cut up from being dragged. His nose wrinkle was infected, his teeth were rotten, and his ears were a chunky mess. He stunk of infection. But the saddest part of his story was that he was found in a park as a stray. Clearly he was unable to have walked there himself, so his physical condition told a story of being neglected for some time and then simply being dumped when he became too big of a burden. In my mind, I try to tell myself that he was the pet of an elderly person who loved him very much and who got sick and didn’t know what else to do. He’s not a young dog and he’s extremely sweet and well tempered, so I know he was someone’s boy at some point in his life. But at some point you have to stop wondering what happened in the past and start solving the puzzle in front of you.

The next month was a series of vet visits and figuring each other out. I had never cared for a handicapped dog, but I did understand the emotional rollercoaster abandoned dogs go through as they learn their new environment. For Eddie, these stresses were magnified because he had no way of venting his frustration through exercise. He so wanted to explore and chum around with his new family, but he couldn’t just yet (partially due to a 2 week quarantine we do for any new dogs to reduce the risk of kennel cough to the resident dogs). One great thing about Eddie is that, as of now, he is fully continent. That certainly helps with our active lifestyle, and I think it helps him retain a bit of his dignity as well.

In the span of two weeks, Eddie saw two vets at two different facilities, underwent a neuter, dental (lost 13 teeth), and was fitted for a wheelchair. I did all his medications for skin and double ear infections which he took like a gentleman. Now, roughly a month and a half after his arrival, he’s looking pretty good and feeling even better. He doesn’t cry out for us, he knows which house is his, loves to ride in the car, and chews all the bully sticks. He is also learning to use his wheels, although that is a work in progress.

Eddie’s neurological condition could be caused by several things, but it appears to be a type of degenerative condition specific to pugs. The speed at which his condition worsens will most likely be gradual, but we have to be careful to savor every kibble, every patch of sun, and every warm blanket just in case. I have always been of the mindset that quality must come before quantity, and while I hope we have some years with Eddie, his comfort and happiness will always come first. He brings me so much joy with his stubborn, pug spirit and silly old man ways… It’s hard to believe that he wasn’t mean to be here, now.